Prelims: Features of SC/AT act and amendments, Article 338A.

Mains: SC’s guidelines and rationale behind, need for amendment and need for a permanent solution over the issue.

Supreme Court has refused to stay amendments to SC/ST Act. 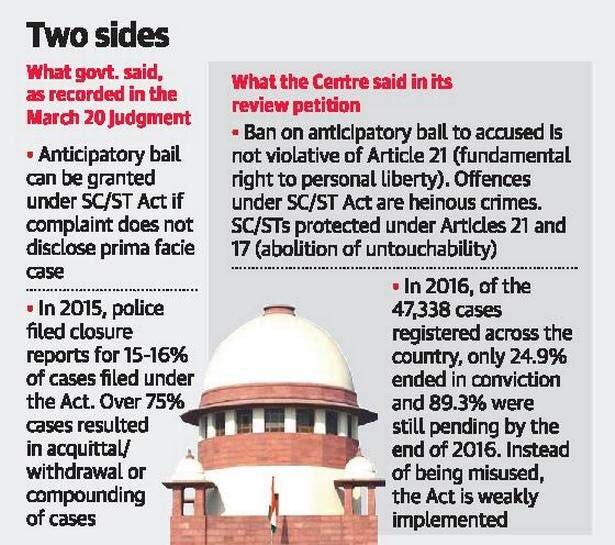 Guidelines issued by the Supreme Court and rationale behind it:

The court referred to the National Crime Records Bureau (NCRB) data for 2015, which said that closure reports had been filed in 15-16 percent of the complaints under the Act. Over 75% of such cases taken up by the courts had resulted in acquittals/ withdrawal or compounding of the cases.

Therefore, there was a need to safeguard innocent citizens against false implication and unnecessary arrest for which there is no sanction under the law.

What the Court missed?

Article 338 stipulates that governments should consult the “National Commission for SC” on all major policy matters affecting Scheduled Castes.

Similarly, article 338 A mandates all major policy decision affecting STs to be taken in consultation with “National Commission for Scheduled Tribes”.

The government decided to retain original provisions because of the following reasons: 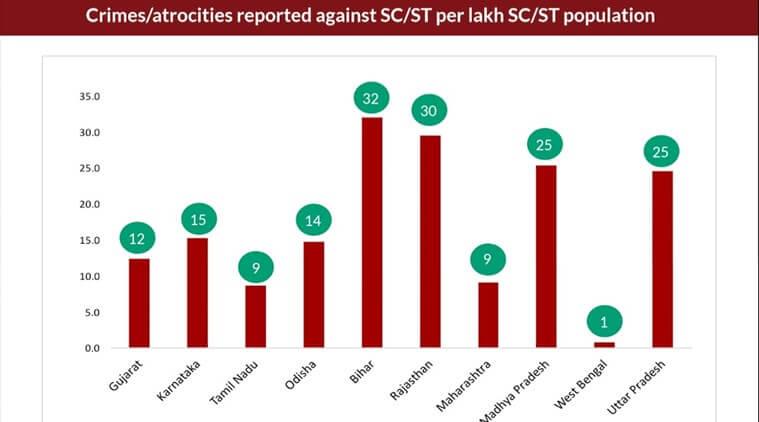 The Amendment Bill seeks to insert three new clauses after Section 18 of the original Act:

The amendments to the Scheduled Castes and Scheduled Tribes (Prevention of Atrocities) Act, 2018 is a move in the right direction. However, no matter how strong a piece of legislation is, all will depend on how well it is implemented.

If the implementing agency does not do its bit then the legislative effort would not be successful in the long run. The administrative set up, which includes police machinery, investigating agencies and judiciary, has to work together to effectively implement such a law.

Prelims: What are neglected tropical diseases?

A new report has found that the Indian government is the fourth largest funder for research and development into neglected tropical diseases.

Key findings of the report:

Need for and significance of R&D into neglected tropical diseases: 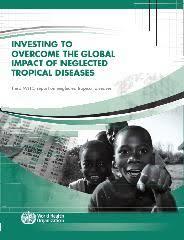 The need for drugs for neglected diseases and also for drug R&D is high in India. The country tops the number of cases for 11 different neglected tropical diseases such as lymphatic filariasis, visceral leishmaniasis, trachoma, tapeworm, roundworm, hookworm, whipworm, dengue and leprosy.

In 2017, there were around 2.8 million new cases of TB, which brought down the global decline of TB. One third of all TB deaths worldwide happen in India.

The National Health Policy (2017) sets an ambition to stimulate innovation to meet health needs and ensure that new drugs are affordable for those who need them most, but it does not specifically tackle neglected diseases.

The National Policy on Treatment of Rare Diseases (2018) includes infectious tropical diseases and identifies a need to support research on treatments for rare diseases. It has not yet prioritised diseases and areas for research funding or how innovation would be supported.

A unified programme on neglected diseases encompassing research and elimination measures is likely to have a greater impact in prioritising the matter in the health agenda and streamlining efforts towards disease elimination. Creating an enabling environment for research and innovation will be crucial if India is to achieve the target set in sustainable development goal 3.3 to end epidemics of neglected tropical diseases by 2030.

Why are some tropical diseases called “neglected”?

The people who are most affected by these diseases are often the poorest populations, living in remote, rural areas, urban slums or conflict zones. Neglected tropical diseases persist under conditions of poverty and are concentrated almost exclusively in impoverished populations in the developing world. 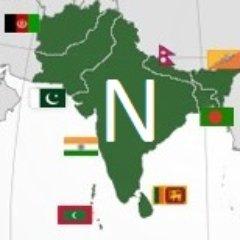 Nitrogen as an essential nutrient:

Nitrogen, which is a vital macronutrient for most plants, is the most abundant element in the atmosphere.

A little over 78% of dry air on Earth is nitrogen. But atmospheric nitrogen, or dinitrogen, is unreactive and cannot be utilised by plants directly.

Until the beginning of the 20th century, farmers depended on a natural process called nitrogen fixation for the conversion of atmospheric nitrogen into reactive nitrogen in the soil: nitrogen-fixing bacteria like rhizobia live symbiotically with leguminous plants, providing nitrogen to the plant and soil in the form of reactive compounds like ammonia and nitrate.

But the natural nitrogen cycle was inadequate to feed the growing population. Scientists Fritz Haber and Carl Bosch solved this problem by producing ammonia by combining atmospheric nitrogen with hydrogen gas at high temperature and pressure—known as the Haber-Bosch process. The Green Revolution, which was instrumental in establishing food security in the developing countries in the 1960s, was driven by artificial nitrogen-fixation. Today, about half of the world’s population depends on this process for its nutrition.

How Nitrogen turned into pollutant from nutrient how it is affecting health and environment?

Nitrogen is an inert gas that’s necessary for life. But we’re changing it into forms that are harmful, overloading the environment with it, and throwing the natural nitrogen cycle out of whack.

Nitrogen compounds running off farmland have led to water pollution problems around the world, while nitrogen emissions from industry, agriculture and vehicles make a big contribution to air pollution.

Over 80% of the nitrogen in soil is not utilised by humans. While over four-fifths of the nitrogen is used to feed livestock, only about six per cent reaches humans in case of non-vegetarian diet, as compared to the 20% that reaches the plate of a vegetarian.

Nitrogen becomes a pollutant when it escapes into the environment and reacts with other organic compounds. It is either released into the atmosphere, gets dissolved in water sources such as rivers, lakes or groundwater, or remains in the soil. While it might lead to favourable growth of species that can utilise this nutrient, nitrogen as a pollutant is often detrimental to the environment and health.

According to the World Health Organization, nitrate-contaminated drinking water can cause reduced blood function, cancer and endemic goiters. Surplus inputs of nitrogen compounds have been found to cause soil acidification. The lowering pH, as a result of the acidification, can lead to nutrient disorders and increased toxicity in plants. It may also affect natural soil decomposition.

Nitrogen pollution has a significant impact on the environment: 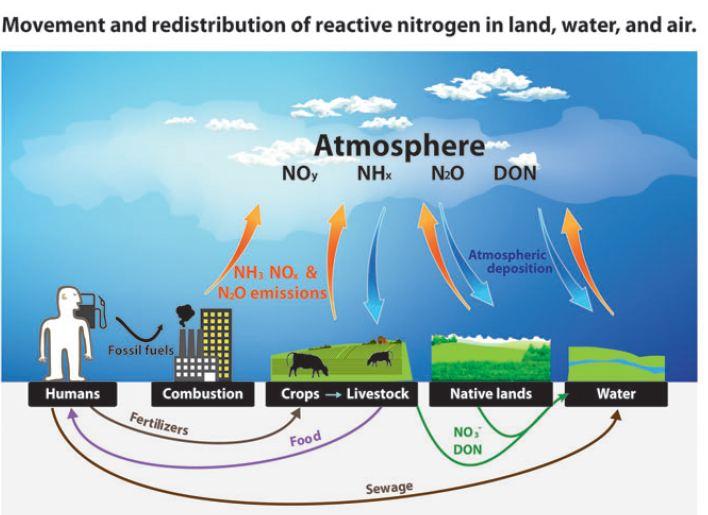